When I start a commission there are several things to be taken into account, several things that go into the design and creation of a precious piece. The most obvious being the client’s brief. For this piece it was simple; a particular shape and size were really the only specifications.

I had given this piece quite a bit of thought; I had a few ideas and was pretty sure of the theme I would use. After a while though I found I wasn’t overly excited about any of them. There was something else knocking about in the back of my head and when I finally decided to investigate it, an idea started to form. I went back to the sketch pad and started again. I was very happy with this new idea but I wasn’t sure if my client was going to like my total re-work. So, when we meet up again I had my sketch pad at the ready. 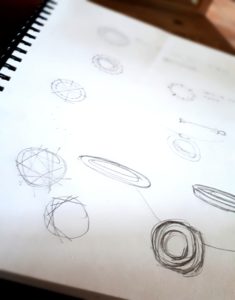 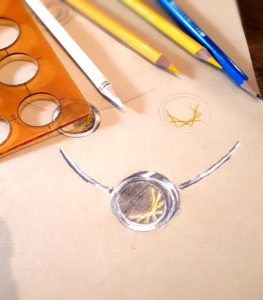 I hadn’t opened the pad before she started to describe a piece of mine she thought she had seen and really liked. I listened to her description carefully whilst holding tight to the closed pad. We looked back through my back catalogue of work to see could we find the pendant she had liked so much. She didn’t recognise any of them as that piece. So, I opened my sketch pad on the last page to show her the design I had come up with for her. “That’s it!”, she said, “I saw that one somewhere”. I replied, “you couldn’t have, because I haven’t made it yet!” How this happened neither of us could figure out but she had described not just a vague design, but a piece that was exactly what I had sketched. We both took this as a good sign that I should go ahead with the new design concept.

But anyway, enough of the spookiness of dream state designs. Let’s get on with the making part.

I created this pendant by making four basic components. The outer case, a small spacer that would sit behind the front wall to add depth to the design, the inner disc detail (silver with gold wire) and the back wall with a jump ring. All of these layers are held in place without solder but instead by tabs or prongs from behind. 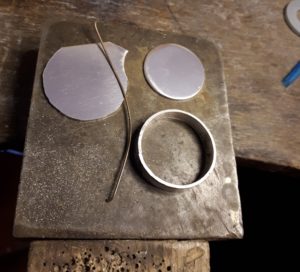 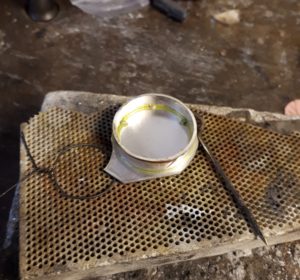 After I had cut the inner disc, I then made the snug fitting outer case for it to sit into, then I set about making the slim profile spacer. Once the gold wire had been drawn down to the right diameter, I started the mapping out and drilling of the holes through which it would be threaded. I experimented at this stage with two variations of the same theme. I opted, in the end, for the school of thought that less is more. 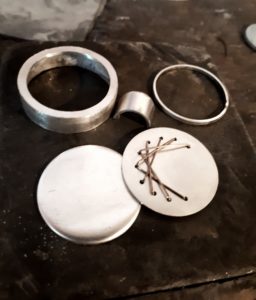 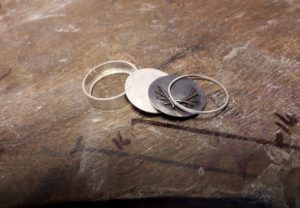 With all the layers complete and polished, the oxidisation of the feature layer complete, and four sets of two parallel lines cut for the tabs, it was a case of bringing it all together.

Once all the layers were in place and aligned, I carefully pushed the tabs down in place to hold the rest of the layers tightly in position.

One more final polish and clean before adding it to a silver cable choker and it was ready for its new home. 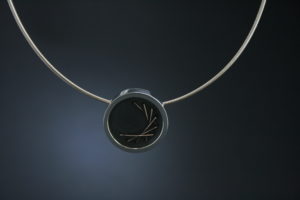 Design and creation are one and the same. Like any other craft person, when I sketch an idea in my pad, I am simultaneously working out the mechanics and possibilities of the making process. There is always room for a design to evolve during its creation and the reaction of my clients always tells me that I have done my job well.